The summer of only two pots

So now that I’m still technically a newlywed, I am also a grad student living and studying remotely.  And of course I should be in the process of writing two papers right now, but alas.  That will come.  Finish laundry and then off to the library.  In the meantime!

I love my program, and I’m here with some truly outstanding people, but there’s a certain sense of disconnect in some ways.  I miss my husband terribly.  I miss our cats.  I realize how grateful I am for my typical life, although I don’t always realize how terribly awesome it really is.  I will be sad to leave this terrific summer, and there are people I’ll pretty much never see again, which sucks, but I will return home with a new sense of gratitude.  As I had predicted when I made the decision to do this program.

I also miss cooking.  Surely, our kitchen is the opposite of anything to write home about (the building was built in 1972 and the kitchen has not been remodeled since;  home decorating TV shows have made us all crazy about remodeling, but seriously many aspects of our kitchen are not entirely functional), but I miss that it’s stocked with every kind of rice cooker and pot or pan and mandolin slicer and everything else that we could even imagine to be able to cook with (thanks to our lovely friends & family) — not to mention spices, stocks, sesame oils, etc.

So I’ve been trying to cook while on a tough schedule and with limited supplies.  But I’ve done alright.

Firstly, while I didn’t bring/pack/whatever any of our old junky kitchen supplies of which we have a few, I instead bought what I could from Publix: some flimsy little “cutting boards” with pictures on them and some uber-cheap yet astonishingly useful knives. 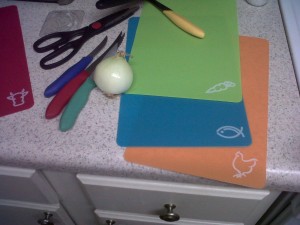 the beef one I will forever use for tomatoes

And went back to being a mostly vegetarian cook; I ate poultry and occasionally bacon while out (as is standard now), but only cooked vegetables, rice, and beans while here.  And a terrific vegetable dish for a 4th of July cookout — secret ingredient: thyme.  And dipped into some tasty pasta salads (mixed with homemade salad dressing, not mayo) but I didn’t get any photos of those. 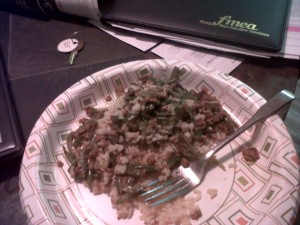 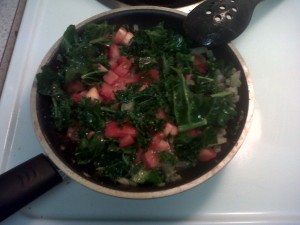 My good friend cameraphonevegan would be very proud of the above dishes.

I am very pleased with myself, however, that I have almost completely cut soda out of my life.  For reals, though. 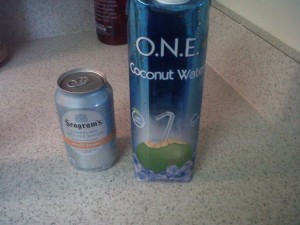 Of course, most of us who are here in this program are in the same circumstances.  We are all away from our friends and loved ones, so we tend to eat out a lot.  And sometimes I eat out by myself.  I got used to that when I was interning – I actually had not had my own car to drive for much longer before that, and come on, there was Tijuana Flats right down the street and Stardust coffee to consume nearby.  I surely gained 10 pounds as a teaching intern.  Oh well.

Here, we’ve got a couple of distractions: 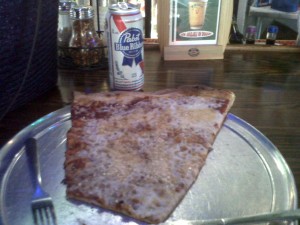 Yes – that is a PBR tallboy, not an 8oz, for comparison. 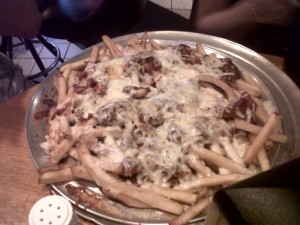 DISCLAIMER: I did not order these myself. I admittedly ate a few, but dude. Seriously. Don’t order pizza fries unless you are willing to deal with the consequences.

But I’ve eaten enough at those particular establishments to feel a certain amount of regret.  Much of it has been fried.  Some of it after midnight.  Some of it while studying intently, some of it while my friend in from out of town developed an affinity for the ginger bartender. 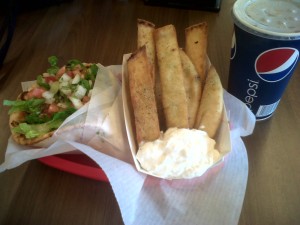 Falafel and pita fries. At least what’s in the cup is an unsweetened iced tea.

These are gifts from Jesus, no joke.  Greek Jesus.  The falafel is not the greatest I’ve ever had, but the pita fries.  Yes.  Someone took a pita, sliced it up, seasoned it exquisitely, and put it together with some seriously delicious sauce I cannot spell.  I brought some of these fries down to a party in Orlando last weekend and even after being reheated in the oven and making the four hour drive, people raved over them.  Oh man. 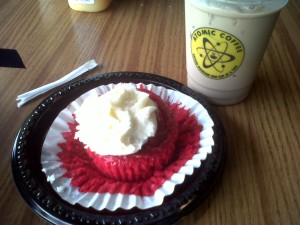 Directly nextdoor to the blessed establishment that sells pita fries (and is the only one I’ve ever seen as such) is one of my now favorite coffee shops ever.  Their custom creations are divine, their iced coffee delicious (especially a mint mojito iced coffee with a cold banana), and their pourovers represent truly delicious coffee.  It doesn’t help that they’re around the corner from the building in which I spend most of my time.  And I’ve been depriving myself of sleep in a lot of bad ways, and therefore dependent on coffee.  And my coffee-maker supreme husband is not around.  Thus, I am the VIP card champ at this place.

And don’t let that delicious looking red velvet cupcake fool you – I hate to say it but it wasn’t that great.  Really spongy, not very flavorful, yeah.  Their sandwiches are tasty but really super greasy (aiming for the college crowd, I guess) but their once-the-kitchen-is-closed curry chicken wraps are really good.

I guess I’ve been busy, haven’t I?  You wouldn’t believe the amount of schoolwork I’ve gotten done in the midst of all this eating, either!

Enough to warrant a bottle of this, which is the only alcohol I’ve bought to keep at my living space this summer: 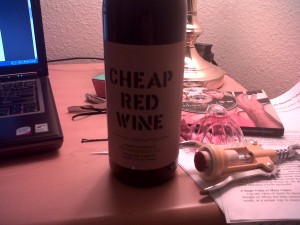 I texted my husband this photo and said, “bad idea or WORST IDEA?”  It turns out it was a little more toward the latter.  Between one, maybe two glasses (read: 1/3 filled plastic crystal cups) of that and putting on old Gilmore Girls while I drowse off to sleep, it helped to drown out the noise coming from the bar directly behind my sublease apartment.  I cannot imagine what the decibel level must have been inside the establishment.  Ugh.

Suffice to say, I’ve had some fun and learned a LOT (irrespective of anything I’ve eaten or not eaten), but I am ready to go home.  After I steal that pita fries recipe.